Last month’s groups writing project went well, so I decided to go for a 2nd round. This time I would like you to take a trip down digital memory lane and choose your favorite picture(s) that you took of nature and post them on your blog or link to them.

Twitter is a relatively new thing for me. I have been doing it for quite awhile, but I am just now really learning how to use it and enjoy it. Luke has shown me how to mark my favorites, and since he did not post from twitter on Sunday Snippets like he usually does, this seemed like a good opportunity to share my favorite tweets over the last few weeks. If you enjoy them, please let me know, so I will know whether to post more later. 🙂

Every once in a while I go on youtube to look for something funny. I usually end up watching a video with kids or animals because I don’t tend to appreciate adult humor (and kids and animals make the funnies innocent mistakes!). I guess I’m around kids enough that the things that make them laugh work for me too.

While looking for a funny video, I ran across a cute video of twin boys laughing together in their crib. It is very cute. 🙂

I decided it was high time I gave a little update on Candice. She has been crawling for just over a month and has now mastered pulling up. She is also really beginning to babble and is getting big enough to enjoy playing with and getting “irritated by” (Phillip’s version of “entertained by”) her siblings. 🙂

Here are a few pictures of Candice taken within the last few weeks: 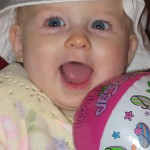 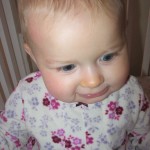 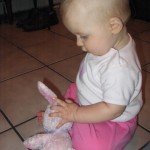 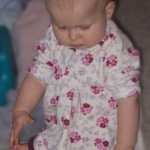 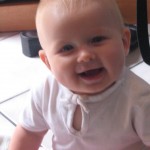 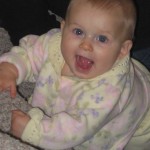 Back in 2004, around the time we went on a trip to Niagara Falls, we decided to stop doing professional portraits of our children and make our own with a digital camera. Recently I posted the pictures of our older four children, but Candice slept through most of the photo shoot. So, we tried again this past Sunday and here are her two best “professional portraits” at the age of 8 months. (I will post more casual pictures of her soon).

Somehow it seems to be a part of my personality to say “sorry,” even when it is not necessary. I think it started out when I realized that I could say it when someone was in a bad circumstance. Of course, I meant that I was sorry the person was experiencing a hard time. Eventually I just began apologizing when it was totally not necessary.

But in reality she really helped me. It has been quite helpful to have her constantly reminding me that apologizing was not necessary. Not only that, but I am suspicious that apologizing constantly gives people the impression (let’s people see?) that I lack confidence.

For awhile, I got around the the reminder not to apologize by saying “starry” instead of “sorry.” She knew what I meant, and also realized that I knew I wasn’t supposed to be apologizing. I believe it is actually saying “I’m starry” (along with my friend’s constant reminders) that helped me to get over my apologetic apologizing because to remember to say “starry” was due to my remembering not to say the real thing. (Wow! Maybe you should read that sentence a second time!) Over time I unconsciously stopped say “I’m starry,” too!

Tonight while chatting with my friend online, I did slip up and apologize, and in so doing, realized how long it had been since I had apologized unnecessarily. Of course, that is not to say that I have not done anything to apologize for. Notice I did say “unnecessarily.” 🙂

And if this post is too long or not exactly what you were looking to read tonight, please forgive me. Does that count as apologizing?

Note: After typing this post, I realized I had unknowingly posted on Robert Hruzek’s “What I Learned From” topic of the month. I had been planning to post and time just slipped up on me. But I accidentally made the deadline. Sorry, Robert, that I almost forgot! 😀 (This is too much fun!).

For some reason I do not like to come across as a damsel in distress. I am not sure why. Maybe it has something to do with the fact that I was a tomboy during my childhood years.

Yesterday at the grocery store, I was only getting a few things, so I did not get a cart or a basket to put my stuff in. The funny thing is that as I walked I kept seeing things I had forgotten to put on my list. So by the time I got to checkout, I was juggling 3 bottles of juice, a bag of carrots, a box of cereal, a bag of soy nuts, a package of lunch meat, a bag of onions, and a paper bag full of apples.

Because there was a line at the self checkout (which I go to a lot) and I was using both hands and my chin to hold everything, I cut in front of a guy just long enough to get a basket (with handles) to put my stuff in. The guy had to hand it to me because if I were to bend over to get it myself, I would drop half my stuff!

I managed to cram it all in the basket except for the orange juice and the bag of apples, both of which had handles. I had it all under control with a basket of food in one hand and the juice and apples in the other.

So far, so good! So far, I had managed myself acceptably well and still did not come across too much as a “wimpy” damsel in distress.

Just as that thought was slipping my mind, the handle to the apple bag broke and apples went everywhere. So, as I sat there dumbly looking at the broken bag, 3 “knights in shining armor” scrambled around chasing the apples that had just gone all over the floor!

Um…..maybe damsels in distress aren’t so wimpy after all? I hope not, anyway! 😐

Luke asked me in a blog post to choose my favorite post. Unfortunately this posed a teeny problem for me. I could not choose! So here is a list of my top 10, plus a “few” runners up. Which one do you think should be my top post?

Almost an Artist
Me learning to make Flag cards

Do You Think I’m Pretty?
the honesty of children

Scary Bathrooms
a 2 year olds view of no touch bathrooms

Short Term Toy
11 Ways to Beat Time at His own Game
One More Birthday
Forget Perfection! Give Me Speed!
Disobedience?
A Time to Scream
Pet Pine Cones
Sports and Computer Games

When I read some of your “Favorite Smells” lists, my mind was refreshed to some favorite smells I overlooked in my list.

Em reminded me that I like the smell of freshly shampooed hair. The funny thing is, I never smell my own hair. It is usually on of my kids when they sit next to me.

Luke reminded me that I love the smell of oranges. There is something about the smell of an orange that makes you just have to eat one! I can look at one all day with no temptation, but the smell….. There is no scent that matches it. I don’t care for dish detergents and other artificial citrus scents, though. It has to be the real thing!

Thanks to those who participated! It was nice to share and even nicer to realize that I am not the only smelly one around! 🙂

If you are sorry to have missed this opportunity, take a peek at the end of this month to see what next month’s “My Favorite Things” group writing project will be!

Today marks day 2 of our home school year. I was in a crunch today, so I had Anna read her Health book out loud to Peter. Because they are going through a fighting stage (I hope), I walked out of the room thinking “yeah, right. That’s really going to go well!”

When I walked back into the room, Anna was explaining to Peter what good posture was, and doing a right good job! I tried to hide my surprise, but I think they might have heard my jaw when it hit the floor. 🙂

They spent at least half an hour on Health and talked about it some throughout the day as they worked to stand and sit with good posture. I think Peter got as much learning (if not more!) from that lesson than I could have given him, and Anna got a lot more out of it by teaching it to someone else!

So, I guess I just hired a new health teacher! 🙂