Candice found a gold mine, and she did think it was hers. Actually they were golden Malt-O-Meal honey nut Scooters.  I believe she is the second of my children to discover this gold mine!

While trying to train my children on how to clean their room, I suggested that they pile everything in the middle of the room. Somehow they got the idea to be silly and tease me a little bit (wonder where they got that from?). 🙂

Here is what I saw when I walked in the room to check up on them. Don’t you think they did  good job of piling “everything” in the middle of the floor? 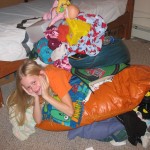 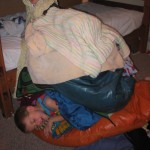 Today I learned who Gianna Jesson is, and I will never forget her. She is a young lady who has made it her goal to be hated (and for good reason). I would like to say more about her, but I think she does the job better herself.

Take the next 20 minutes to watch 2 videos that you will never forget. If you are tempted to skip out on the videos, please just watch a few minutes, and if you are not interested in continuing, you can turn it off. Please watch the videos.

After you watch the videos, if you want to know more, consider reading the book Gianna by Jessica Shaver. It might be a book worth investing in and sharing or putting in your local library. Also, here are a few links that have more information on Gianna.

We have developed a method to our madness! (sorry, I couldn’t resist). Seriously, we have found a way to help motivate our kids to help around the house. We give them money!

Now I am sure you are wondering why it is so exciting to have fake money. Well, they use the fake money to buy stuff! When there is one lone juice box in the refrigerator, they can buy the privilege of being the only kid to get a juice box while everyone else drinks out of a boring old cup! 🙂 When someone wants to sit in a favorite chair, he/she can buy the privilege of sitting in the chair.

So, you can see that wishers also come in handy for settling disagreements! For example, if Peter and Phillip both want to play on the computer, the chance to go first can be auctioned. If Peter wins, he feels good because he gets to play on the computer first and Phillip feels good because he now has more wishers than Peter and can win the “auction” next time (as long as Anna doesn’t have more than Phillip)!

Other examples of times we give wishers are:

Note: We are being very careful not to let our kids think they can “buy” anything they want. We are making it clear to them that wishers are pretend and are not to be used on their friends to persuade them to make a toy trade…unless it is unfairly tipped to their advantage. Teasing……just teasing! 😀

I had a lot of short but interesting bits of news that I wanted to share. Because not everyone who reads my blog also follows me on twitter, I decided to put them all in one “miscellaneous” blog post. Maybe I can make this a Monday tradition. 🙂

When I lived in Nashville, I shopped at Aldi’s, but when I moved to Rhode Island, I could not find one. Fortunately there was a similar store called Price Rite. Wal-Mart is usually my second choice for groceries. I have always wanted to do a price comparison between the two, but now I don’t have to. Someone else has done it for me. This comparison is between Aldi’s and Wal-Mart, but I am fairly certain that you would find almost identical results between Price Rite and Wal-Mart.

Bethany: (after getting on a bus) “We sit in Fire Twuck.”

Tabetha: “She’s got her curls toed.”

Today Phillip understood the good news of Christ. Luke talked and prayed with him, and he asked Jesus into his heart! I am so glad!! Hallelujah! Praise the Lord!! I get to see my little boy in Heaven!

Besides me (and I even posted mine late), my husband posted his favorite pictures, and Meg linked to me with a picture from her blog. I don’t know that it was her favorite, but it was a cool picture nonetheless.

If you meant to post your favorites and were too busy, too forgetful, or a combination of both, please go ahead and post your favorite pictures. If you don’t want to go through all your pictures, you can just pick one you like, or maybe you could let me know which pictures you like that others have posted. And then, of course, there is always the option of just enjoying the view.

I just noticed tonight that my parents have been divorced for half my life! Weird! It seems like yesterday. I remember being so sure that they would get back together and be “the way they were.” I hung onto that hope until they both remarried. Now they have been apart for almost as long as they were together!

When Luke and I got married we discussed the issue of divorce and decided that we were together for life no matter what – no exception! And I believe it with all my heart. I am so glad we made that decision! Our kids will never have to go through the disappointment and heartbreak of discovering that their parents no longer want to be together.

Of course, the kids are not the only ones I am concerned about! It’s a great feeling for me too. I have no desire to have anything else whatsoever to do with divorce. And there is no feeling in the world like knowing that someone has willfully chosen to be committed to you no matter what. Maybe, just maybe, that is why God gave us a choice of whether or not to choose Him. There’s just nothing like being willfully chosen.

We introduced our children to the game of gossip this week. While playing it today, Luke happened to put his hand on Peter’s other ear while he was whispering his “gossip” to Peter, I jokingly said, “You have to put your hand on his other ear to keep his whispers from coming out.” Luke jokingly said back, “Yep.”

Here are some things I am thankful for concerning my fall and Candice’s fractured leg. I know God has been, and will continue to, take care of us!

Candice has her first cast already…at 9 months of age. Here’s what happened. I was going down our deck stairs one evening while holding Candice, and decided to fall down the last three steps.

I did everything I could to protect Candice, including pulling her away from the side I was obviously going to land on. I was able to protect her head and body, but her little leg was still dangling down. When we landed at the bottom, my knee landed on her lower leg.

I immediately called to Luke, who came down to take Candice from me and took her inside. After I calmed Candice down as much as possible and calmed myself down, I took her to the ER. When they checked her in, they took both her feet and moved her legs in circles to see if her joints were okay. She did not make a single peep. I began to wonder then if I had made a big deal out of nothing.

To make a VERY long story short, we spent 9 hours in the waiting room. The doctor did an x-ray as a precaution, but he did not think it would show anything. He seemed a bit surprised when it showed that her shin was fractured. That was when I heard, “You were a smart mom to bring her in.”

She left with a cast on her leg, which had to be redone 2 days later because it was too loose. They were afraid it would fall off! Amazingly, she was crawling on the cast the first day and eventually learned to pull up with it on. She has also learned to make noise by kicking the floor with her cast! 🙂

I have more to say on this topic, but I thought I should get the basic information out there before I get in trouble by my friends and family that might not know yet. I guess it might be a bit late for that, huh, since it happened over a week ago. 😐 Maybe they won’t hate me too much? Please?

Stay tuned for more on Candice’s Cast and hopefully a picture (if I ever remember to take one)!