Doesn’t this sound like an awesome relationship? What boy wouldn’t want someone always there sweeping his messes under the rug? Unfortunately, as awesome as it sounds to live in this scenario, it has some major issues.

Even though Tom and his mom loved each other, Tom had a big problem. He wasn’t learning how to be responsible. When he gets out in the real world without his mom there to defend  him, he won’t know how to fend for himself. He is learning that no matter how much trouble he gets into, him Mom is right there to dust him off and cover for him. His mom has literally been running herself ragged trying to keep up with the growing mischiefs of her son.

It seems so awesome to have a net underneath us as we walk on the tightrope of life, but unfortunately the net eventually has to be taken away. It is safer to walk knowing there is no net than to walk with the expectation of a net that is not strong enough to hold. The idea of the government being able to pick us up and dust us off after every mistake we make sounds so alluring.

But it can’t go on forever, and the government does not love us like a mother. It is very possible that about the time we Americans grow accustomed to being cleaned up after, the government will change its ways and use our dependence to take away our freedom.

Yesterday the New American Tea Party took place at different locations across the nation. The purpose of this was to let the government know that we do not approve of all the bail outs and unnecessary spending. If America keeps up at the pace it is going right now, we will all drown in debt.

Have you let the government cover for you like Tom? It isn’t too late to change your ways and let our leaders know how you feel about the crazy spending habits of our government. Send a letter or call your representatives to let them know what you think.

There were at least a thousand present at the Rhode Island tea part at one time. Since people were constantly coming and going, there were probably even more than that!

Below are some pictures of the Providence, Rhode island tea party contributed by David Rinebolt. Thanks David!

Click on each image to see a bigger picture. 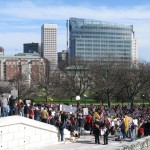 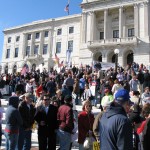 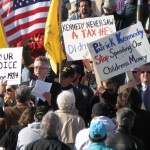 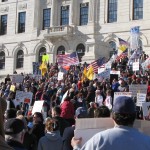 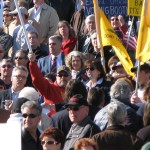