During our last snowfall, the kids and I built a snowman together. I rolled the bottom ball, Anna rolled the middle one, and Peter rolled the head. Phillip busied himself dusting snow off the van (not sure why, but he was more interested in that than the snowman).

Luke agreed to help stack the three balls, so as soon as we got the balls as big as they needed to be, I came in to let Luke know we were ready. He took a glance outside and said, “That’s not big enough. Make it as big as you can manage, so I did.

Now that snowman may not look very big to you in the pictures, but I tell you, rolling that ball was no easy feat! It got so big that I was literally laying across it, pushing with my feet and hoping it didn’t roll the wrong way and dump me on the ground! Then I noticed that I had to move it about 5 feet over to where we were planning to have the snowman stand. Of course, in  a foot of snow, it grew quite a bit in that distance. Talk about some exercise as I used my whole body to roll the huge snowball across our driveway, wondering with each push if it was going to budge. It was fun, though!

I helped Anna make the middle ball bigger because the size ratio for her was about the same as for me with the bigger one. We had very little trouble working together. And I had no trouble at all making Peter’s head bigger. Unfortunately I dropped it and broke it twice before I was done. So, I guess you could say Peter’s head was a remake. 😀

After Luke helped put Mr. Snowman together, he was taller than me and almost as tall as Luke. And best of all, he seemed to have a bit of personality. He had a bright smile* and rosey cheeks that just brought life to him! He also seemed to be leaning comfortably to the side as if to say, “Aren’t I cool?” And he really was….until he melted.

But never fear, the snow is falling again as I type, and you never know. Mr. Snowman might just return with all his coolness and give us another bright, crooked, frozen smile! 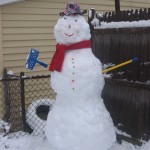 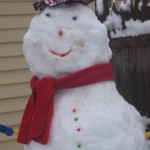 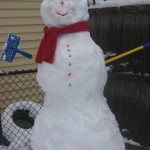 *If you are wondering, Mr. Snowman had jelly bean eyes, a carrot nose, a gummy worm mouth, skittle buttons, and broken sponge mop arms. And he didn’t complain a bit about having broken arms!

7 thoughts on “A Snowman With Personality”